Austria is a strange country. When the railway platform displays the arrival time of a train as 9:07, it arrives exactly at 9:07 and not anytime between 11 and 2, as it would in normal places. 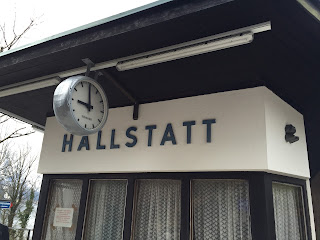 They aren't content with just trains being on time, by the way. Cities like Vienna have buses, trams and five different subway lines apart from the regular inter-city trains. All this, but not a single autorickshaw charging oneandaff anywhere in sight. Weird. 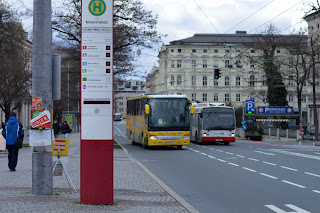 We made use of all modes of transport in Austria. Buses, where you could either buy tickets from the driver after getting on board, or use a city card which entitles you to hop on to any bus, tram or subway train within the city. The Salzburg city card for instance worked really well for us, as it allowed us free use of buses, as well as entry to almost all the major tourist attractions. 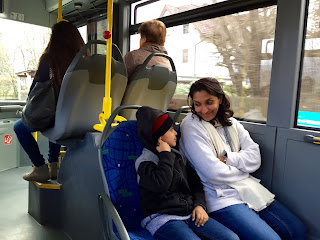 Vienna had trams too, which were Spider-Man approved: 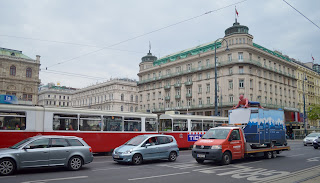 We used the Austrian Federal Railways portal to book tickets for inter city travel, like getting from Vienna to Hallstatt. Like pretty much everything else in Austria, the site is efficient and works well all the time. 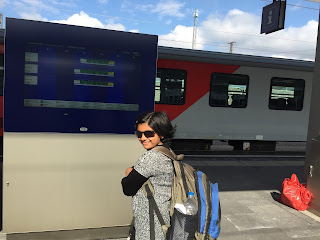 These trains have a catered dining service called Henry, which serves coffee and sandwiches. No samosas though. 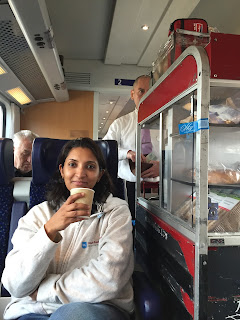 We hopped on to a ferry as well, connecting the Hallstatt railway station to the city center. 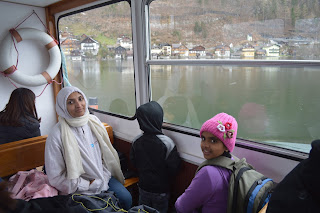 The only problem we faced was on the train from Salzburg to Venice, where we hadn't reserved seats in advance. We had to walk across carriages with our luggage looking for unallocated seats, which could have been avoided if I had the presence of mind to book seats as well. No one really makes room for you either, unlike our trains in India. Again, efficient and effective, but not really the friendliest place in the world.

But it is one of the most beautiful. More on that later.
Posted by Madhav at Friday, June 19, 2015 No comments:

I blame Sai Kumar. I don't think I'd have wanted to visit Vienna if not for that one line remark from Aaram Thamburan, where he reminds Mohan Lal of his favorite city. Of all the places in all the world, why Vienna? Eighteen years later, a wife, two kids and a couple of weeks away from work, I decided to find out. 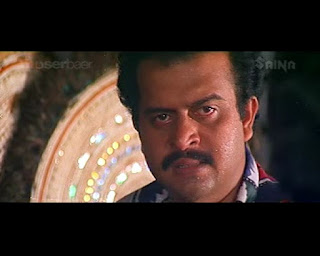 Planning for a European holiday starts at least a year in advance. I wanted to do this the right way, so I spent a few months googling for 'Vacation in Europe'. I then took a couple of months trying to create a Google Map with those nice red pin thingummys spread over Europe, indicating where we planned to visit. Another month was spent in trying to locate the right travel planning site which would take those red pins and give me a detailed travel itinerary, including costs of tickets, coffee and samosas. I spent hours on sites that provided detailed information on the weather, what to wear, food, drink and traveling with children.

Armed with all this, I was ready for the board meeting with my wife and kids. I outlined the principles I had come up with, spoke about the areas we would cover, and was about to get into the do's and don'ts when my six year old promptly vetoed the whole plan as it did not include Paris. Why Paris? Because his best friend has been there and he needs to go too. Not to be outdone, my eleven year old daughter jumped in and asked for Athens. Because Percy Jackson. I was wondering how to include Vienna, Paris and Athens in my proposed tour of the Scottish distilleries art museums of Scotland, when my wife, the Chairperson of the board, declared that we will visit Italy and Austria. Because Chairperson.

And that was that.