Was the Death Star attack an inside job?

An excellent analysis on the famed Death Star attack. Asks a lot of uncomfortable questions.
Posted by Madhav at Friday, March 28, 2008 3 comments:

Second RIP entry for the day

And now Raghuvaran is dead. Not that I was a big fan, but still. He was good in Shiva, Anjali and Daivathinte Vikruthikal, from the movies I've seen.
Posted by Madhav at Wednesday, March 19, 2008 5 comments:

He's on his way to Rendezvous with Rama, probably.

I hope the David Fincher - Morgan Freeman film gets made.
Posted by Madhav at Wednesday, March 19, 2008 3 comments:

Great. For the first time, I'm unhappy with LJ. Not the site per se, but the management behind it. Take a look at this news post which sneaked in something totally under the radar. I had read it yesterday, dismissed it as another one of those crappy pat-ourselves-on-the-back announcements which don't mean anything much, but are harmless. Turns out a lot of LJers read it the same way, till this one comment. All hell broke loose after that, and I'm glad it did.

Email ThisBlogThis!Share to TwitterShare to FacebookShare to Pinterest
Labels: lj

The pic below is from Ben Stiller's upcoming film, Tropic Thunder. The plot, sounding quite similar to ¡Three Amigos!, deals with a group of actors who are forced to become the soldiers they are portraying. Hopefully, it should be as funny as Stiller's last movie as a director, Zoolander.

Anyway. Guess the man in the circle. 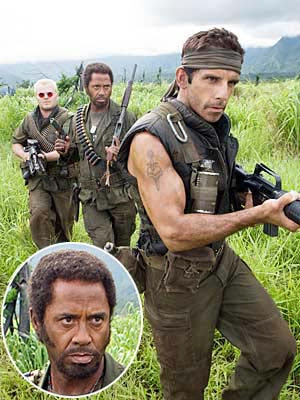 Heard of the Mallu rock band Avial? Their album came out recently, it's available on Musicyogi. Highly recommended.

This is probably their best song, the one that got them noticed:

No Country For Old Men

Loved the movie, need to watch it again.