Nice list. For the first time in years, I find myself viewing Ebert's top ten year end list without having watched a single one of them. And this time it's more like a top twenty.

Posted via web from Mostly Charmless

Once Upon A Time In Kerala

Once upon a time in Kerala, there used to be a very entrenched, heirarchical caste system. Some would argue that this still exists even in modern Kerala, but let's not go there. We are all honorable men and women.

So, once upon a time in Kerala, there was a deep rooted caste system. Some say this started with the advent of the Nambuthiris, who pretty much treated anyone not a Nambuthiri as an untouchable. This extended to other castes soon enough, which meant you had the Nairs who were expected to instantly cut down the heads of lower caste people who presumed to defile them. This defiliation could occur because the lower castes were on the same road as them, were looking at them or were within 72 feet of them. The Nair man - for it was mainly men who walked out on the road anyway - was expected to have a bath in a temple pond immediately, to wash off this pollution. The Nair man was not expected to eat before he did this cleansing and was universally shunned till he corrected this sin.

Thankfully, we live in an advanced society now where this does not occur anymore. We are all honorable men and women and we do not differentiate. Right? Right.

I really can't believe that 20,000 people fell for this scam. Then again, there's one born every minute.
This is the email which found its way into my Inbox. Why do I feel this has an Indian origin?

Everyone wants a meta site. You know, an umbrella thingy which aggregates your twitter, facebook, blogger, orkut, flickr, youtube and bank accounts. Okay, maybe not the last bit, but you get the idea. The good news is, there are sites like posterous which hope to become the master of meta. They can connect to all your social networking sites, they can parse pictures, view videos, you name it. And all this over email, to boot. Impressive, I'd say.
But then, once you have a few meta sites around, what's stopping a super-meta aggregator which would rule them all and in the darkness, bind them? Hmm?

Rachu started 'proper' school today. She's done with the Montessori levels and has entered Std I. I dropped her off to school in the morning; she was dressed in her new uniform, complete with a school belt and tie. Damn, she's growing up faster than I'd want her to.
Posted by Madhav at Wednesday, June 03, 2009 No comments:

I took the easy way out the other day at lunch. The easy way out was to pretend the cockroach in my food didn't exist and get back to work without barfing my guts out. I also resolved never to order food from that stall in the food court again. This resolution should last till end of the week. Hopefully.

It's been worrying me, though. Why didn't I create a fuss and demand to see the manager? Why didn't I demand a full month's lunch, free? Maybe because the cockroach was so tiny, it really wasn't their fault it had sneaked into my plate. Or maybe because the first thing that came to my mind was the old scene in movies where the hero tries to weasel out of paying for lunch by inserting a roach into his plate at the end of the meal. Balachandra Menon in Chiryo Chiri and Jayaram in Nagarangalil Chennu Raapparrkkam, if I remember correctly.

For the 3rd time

In case this setting works.
Posted by Madhav at Tuesday, April 07, 2009 No comments:

another test.
Posted by Madhav at Tuesday, April 07, 2009 No comments:

For testing the Intense Debate stuff
Posted by Madhav at Monday, April 06, 2009 No comments:

So, I became a dad all over again last Monday. Thanks to technological marvels such as Blackberry, Facebook and Twitter, I could take pics and let people know within minutes of my son's birth. Felt weird, felt good too. Feb 23 was an amazing day for a lot of happy Indians, it became even more special for me.

The baby is doing just great. He keeps us awake most nights as any newborn worth his salt would. His mom is also fine and well, recuperating faster than most, thanks to an excellent gynaec whose only advice after the Caesarian was to run up and down four flights of steps. My wife being who she is, loved the advice and proceeded to do exactly that. She's almost fully back to normal now, within just a few days of the operation.

The big sister went through a mild patch of severe stomach ache and vomiting, which started curiously enough the day the baby reached home. She got a lot of extra attention the next couple of days and is back to normal now, thankfully.

We have named him Karan. Karan Madhav. You know he's going to steal your daughter's heart one day, don't you?

Our first choice of name was Kabir, though. It's sad that we live in times when we had to rule out a child's name, for fear of giving him an unnecessary handicap when he grows up. Kabir, you see, is perceived as a Muslim name in the south, especially in Kerala. Sindha and I thought of conversations which would go:

This would ensure him getting beaten up by all three communities. The Sikhs might also join in, given the importance they give to Kabir's poems. As much as we both loved the name Kabir, we just didn't want to setup our son for trouble later on in his life. The above scenario could very well turn out true, the way things are going these days, especially in Karnataka. I'm not very proud of it, but we chickened out finally.

Here we go with my predictions for the Oscars:

Actor in a Leading Role: Mickey Rourke, The Wrestler

Actress in a Leading Role: Kate Winslet, The Reader

Actor in a Supporting Role: Robert Downey Jr, Tropic Thunder. I'm kidding. Heath Ledger of course, for the picture that should have been nominated as Best Pic.

I'm not going to try and predict the winner for Best Original Song and Best Score, for some reason.
Posted by Madhav at Thursday, February 19, 2009 7 comments: 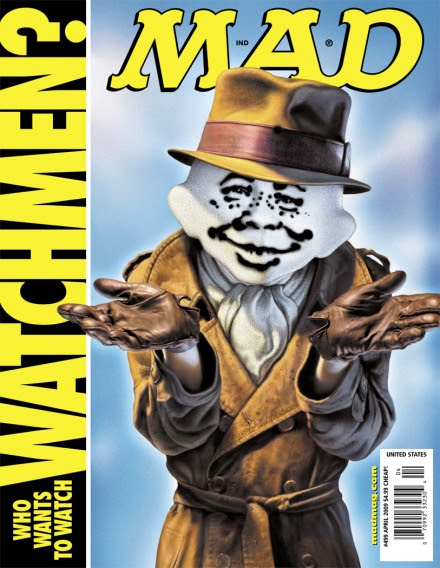 What is common to the following songs?

Ans: They are all tracks from Watchmen. The last is featured in the end credits of the Tales From the Black Freighter DVD. Excellent collection, don't you think?
Posted by Madhav at Friday, January 23, 2009 No comments:

A fantastic montage of the best of 2008. I haven't watched half the movies featured, but I really want to, after viewing this.